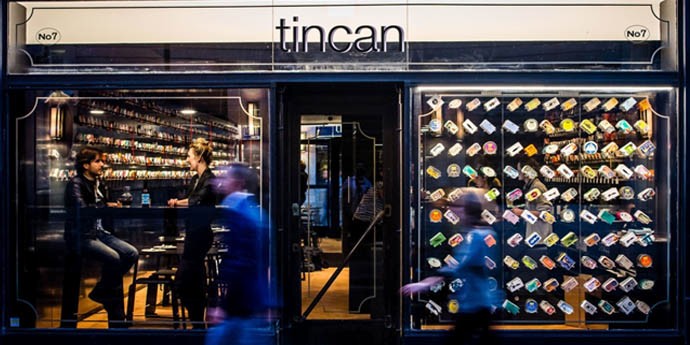 Launched during the London Design Festival and serving ‘the best tinned seafood in the world,’ tincan is a six month pop-up restaurant project in Soho by AL_A, supported by Corian®.

While designing a new cultural centre in Lisbon, the AL_A team discovered a former fishing tackle shop, which was transformed into a tiny, vibrant restaurant serving only tinned seafood. What started as lunch quickly became an idea, and subsequently a new project.

tincan elevates the tin to an object of desire in an environment designed by AL_A, which offers 30 different tins, all of the highest quality seafood, to eat in the restaurant or to buy in the shop. The idea is very compelling: no kitchen, the finest tinned seafood delicacies, super healthy, and great graphics with the tin as the hero.

Corian® features strongly as the primary surface in the space. It has been expertly fabricated to create interior wall cladding which is fitted with pegs to display a variety of can designs from around the world. Corian® also forms the sleek bar top in the restaurant which has been invisibly integrated with wireless charging technology for smartphones from Powermat, compliant with the standards of the Powers Matters Alliance.

The color of Corian® chosen for tincan is new Deep Nocturne, an ultra jet black that creates a striking contrast to the iconography of the packaging on display. This is one of several new dark hues made with DeepColor™ Technology*, a patent pending manufacturing process developed by DuPont which enables the creation of dark solid surfaces offering deeper, more intense and durable colour, improved wear performance, and easier fabrication and fitting.

Amanda Levete, founder of AL_A comments, “The more we looked at the space the more ambitious we got about how we were going to display things. We can’t, as architects, come in and paint the walls black, we have to do something a bit special. So we called in all our collaborators. The new deep black of Corian® made an absolutely perfect backdrop.”

“DuPont is delighted to support this unique and exciting project in the heart of London and to collaborate once more with an architectural practice of the stature of AL_A. It’s inspiring to see the ways in which creative minds can translate a design vision using all the many benefits of Corian® and it is especially satisfying to see how well our pioneering DeepColor® Technology has been received by the leading lights of the design community,” says Maurizio Solaro, marketing manager of Corian® for Europe Middle East and Africa.