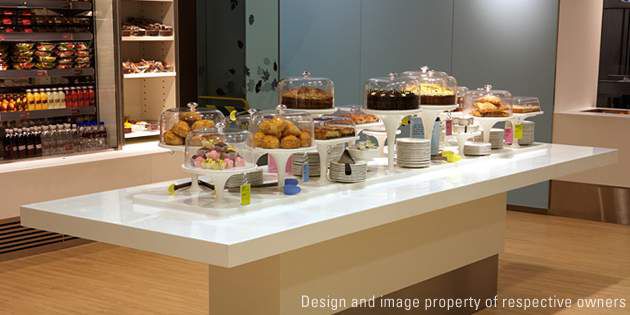 The new Westfield shopping development in London presented an ideal opportunity for iconic brand Marks & Spencer to showcase an innovative design for its in-store cafe. KIWI&POM were commissioned to bring a fresh vision to creating two distinct feature hospitality destinations that would be both welcoming and contemporary, while delivering optimum functionality.

The concept required striking focal features while using a variety of both natural finishes and high-performance, man-made materials such as Corian® solid surface. The two key applications include an ‘Alice in Wonderland’ cake table within the M&S Café and a separate multi-faceted food service counter and elliptical seating booth for the M&S Kitchen in the public area of the mall.

The M&S Café with “Alice in Wonderland” Cake Table

KIWI&POM started by going right back to basics and re-examined the menu in order to establish the role of the cafe as a self-service, sit down, in-store destination, selling hot and cold food throughout the day.

KIWI&POM concluded that a central cake table should become the focal point. The wide range of patisseries baked in-store provided a feast for the eyes upon entering the café. The ‘Alice in Wonderland’ cake table was designed to allow a blank canvas ready to elegantly display product without requiring time-consuming and highly skilled styling in order to bring out the best in the product. Against this backdrop, the abundance, interest and appetizing appeal of the fare can speak for itself.

“As a centre piece, we wanted the cake table to be an interesting, beautiful object in its own right – with or without product,” says Emma Young of KIWI&POM. “The tray rail is therefore simply a recessed plane and the sculptural display pedestals ‘grow’ out of the table top. This detail also has the advantage of being easy-to-clean – the solid, nonporous, seamless surfaces of Corian® can be wiped down easily and do not promote the growth of mildew. The cake cloches reinforce the notion of quality products”

The M&S Kitchen and Seating Booth

Marks & Spencer was also presented with the opportunity to capitalise on the mall space directly outside the entrance to their new flagstore in Westfield and wanted to establish a unique destination that would function as a stand alone café and meeting place.

KIWI&POM conceived a unique, bespoke design comprised of two separate elements - a serving counter clad with Corian® solid surface, where freshly prepared hot and cold food is displayed, and a stand-alone seating area which for 60.

The seating area rests directly beneath an elliptical void on another level of the mall, making the aerial view an important consideration. KIWI&POM created graphic impact using offset ellipses, bold colours and repeat shapes in the furniture layout. The pure white, faceted, exterior provides protection from the hustle and bustle of the mall. By contrast, the brightly coloured, upholstered interior invites customers to relax and sit in comfort observing the world go by.

The angular, multi-faceted exterior, created from Corian® solid surface, relates to the mall’s trademark faceted glass ceiling. When the sun shines brightly, the ceiling casts distinctive triangles of light and creates an interesting interplay with the form.

“Corian® was chosen for this application to echo the use within the in-store café and because it provided the ideal combination of aesthetics, durability, repairability, and the technical capability to produce this very complex design,” says Kam Young of KIWI&POM.

The Westfield mall interior design plays strongly on the metaphor of nature with upright structural supports mimicking tree boughs and the ceiling representing the leaf canopy of a forest. KIWI&POM wanted to echo this approach and observed that the elliptical void above the Kitchen was reminiscent of a pond, whilst the Kitchen serving and seating areas could be perceived as two ‘pebbles’ dropped within the pond. This ‘pebble’ shaped form not only suited the circulatory flow of the mall, it also gave the Kitchen a distinct identity relevant to the Mall environment. The pebble device was used repeatedly to provide a strong graphic impact from above.

Given the primary location of the scheme, KIWI&POM wanted to deliver a design that was distinctive and memorable. In order to succeed, the design needed to perform as a meeting place and landmark as well as a functional cafe. The end result is a sculptural design with which people interact both inside and out.

Each triangle was CNC’d from 3D CAD data supplied by KIWI&POM. The CNC allowed for the creation of a 3D structure from sheet material as well as an engineered fit between panels. KIWI&POM developed a numbering system to allow the fabricator to know where and in which orientation to install each panel. This was like one huge complex jigsaw puzzle - if just a single panel had been installed incorrectly the entire structure would not have fit together cohesively.

The entire unit was pre-fabricated off site in 24 sections which were manually transported into position onsite and joined on site. The section ends were designed on an angle to disguise the joints. The sections were joined using the special Corian® joint adhesive which created a chemical bond and were then polished out for a seamless finish.