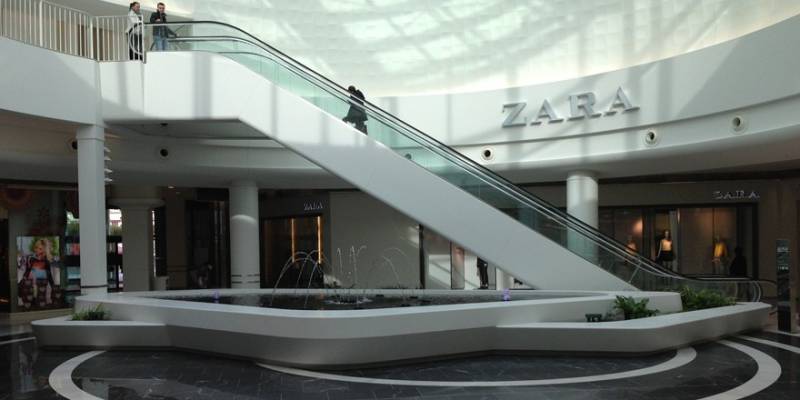 Recently renovated, Place de la Fontaine, the central point of the shopping centre in Rennes, France is in a large dip 15 metres long and 11 metres wide. Constructed of 75 sheets of Corian® (230 m² of material) it is completely curved with no single axis point.

A made-to-measure space, completed in record time, the project embodies the spirit of Brittany, proposed by architects Saguez & Partners. This reflects the overall theme of “Island Clearing”, in accordance with the owners’ wishes.

For Gwénaël Plesse, Director of the architecture department of Saguez & Partners – the company that designed the fountain - nothing was left to chance. “This fountain, which was decided upon so late in the project, had to be installed quickly. Initially planned to be in concrete, that idea was later abandoned because completion times were too long. The inherent qualities and speed of implementation of Corian® led to us using material”.

Florent Kergoat of Transformeurs & Partenaires states: “All the templates to be laid were completed on our premises with digital technology processing, so there would be no dimension problems. We worked in the workshop for two months, in ‘military’ mode: thermoforming, digital cutting, processing, gluing, 3D configuration etc. The timber moulds that we created have become an integral part of the structure of the fountain. Each mould was unique, because no shape was repetitive. Our strategy of taking charge of the entire project has paid off, since we were able to respect the costs and deadlines”. He adds: “Having been designed and dimensioned for a crowded place, we know that the fountain is solid because on the inauguration day, it resisted the significant number of people standing or sitting on it!”