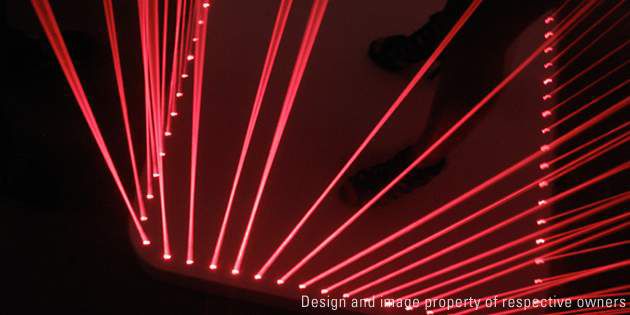 When electronics-in-design specialist Moritz Waldemeyer was asked by Wallpaper* Magazine to come up with a concept for turning the home into a party venue, he turned to Corian® solid surface as the material to realise his vision. Having worked with this ultra-versatile, high-performance material previously for several inventive projects, it was the obvious choice for such an instant object of desire.

His concept was to capture the ambiance of the club scene by combining audio and lighting technology with a useful piece of furniture. Thus the “Disco Table” was born – a sleek coffee table by day, which turns into an illuminated acoustics system by night. Perfect for throwing that “it was so good we were dancing on the tables” legend of a house party.

Drawing design inspiration from the Braun stereos of the 1950s, the low-level table is encased in Corian® in cool Glacier White, and is synced to an iPod or iPhone while a sound system, based on the Voigt pipe speaker of the 1930s, ensures outstanding audio quality. The real eye-popping feature however, are is the set of lasers around the top edges of the table which throw up a virtual “cage” of colour-phasing light effects to surround those brave enough to show off their moves in full glory. What’s more, the integrated haze machine ensures full-on party atmospherics.

Waldemeyer comments, “This was a really exciting commission and brief from Wallpaper*. I chose Corian® surfacing material for two main reasons: its visual and tactile properties give the object instantly a luxurious feel and appearance. For the Disco Table, the acoustic behaviour was important too, and the material is an ideal choice for the creation of high quality speakers.”

For those whose home party just won’t be complete now without a Disco Table, orders can be made direct to Moritz Waldemeyer.

The “A Table” Furniture Design

Corian® for Furniture and Furnishings