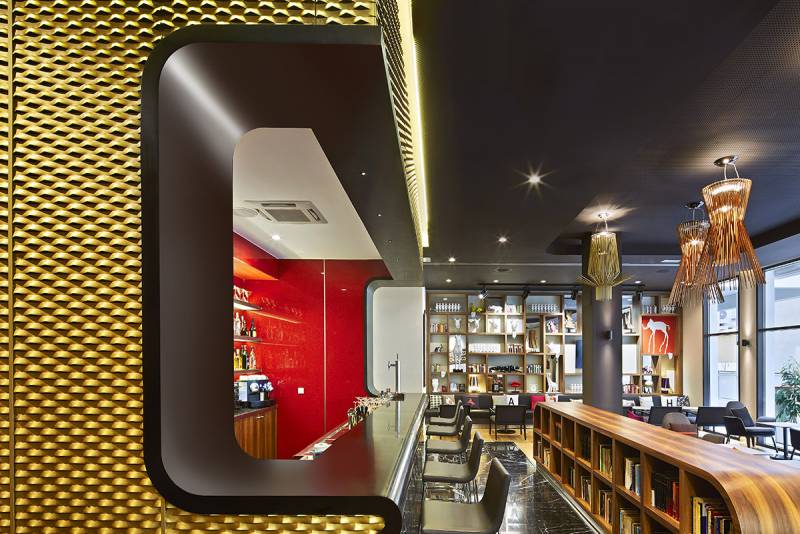 The architectural studio TBI of Barcelona, run by architect Miguel Jordá, is one of the first to have used the innovative DeepColour™ Technology developed by Corian®. Hotel Vincci Gala, in Barcelona’s Eixample district, features a dramatic bar in Deep Nocturne colour.

Gregor Mertens, the architect and design coordinator of this four star, 80-room hotel explains why he chose to use this new DeepColour™ technology for the design. "We have worked with Corian® to achieve a continuous, organic form, which contrasts and fits in perfectly with the rectangular golden box/frame depicted by the bar”. Mertens also highlights the importance of the lack of seams, joints and off-white lines between the sections, adding that " the new technology and the Deep Nocturne colour by Corian® have allowed us to achieve this and also to bring about the contrast we were looking to create with the gold, which can also be seen around the rest of the building."

Contrast (between colours, textures, sensations and periods) is the backbone of this project at the Hotel Vincci Gala, whose name was chosen by popular vote and refers to Dalí’s muse and companion.

Taking this approach, and using Corian® in Deep Nocturne, the TBI studio has managed to capture the perfect fusion of ancient and modern, elegant and informal in the hotel bar. The design also had to be practical. Mertens says, “this is a surface that must also be able to cope with all kinds of liquids and stains and constant activity, which, in addition to its appearance and design, is why we have opted for Corian®.

The “A Table” Furniture Design

Corian® for Furniture and Furnishings