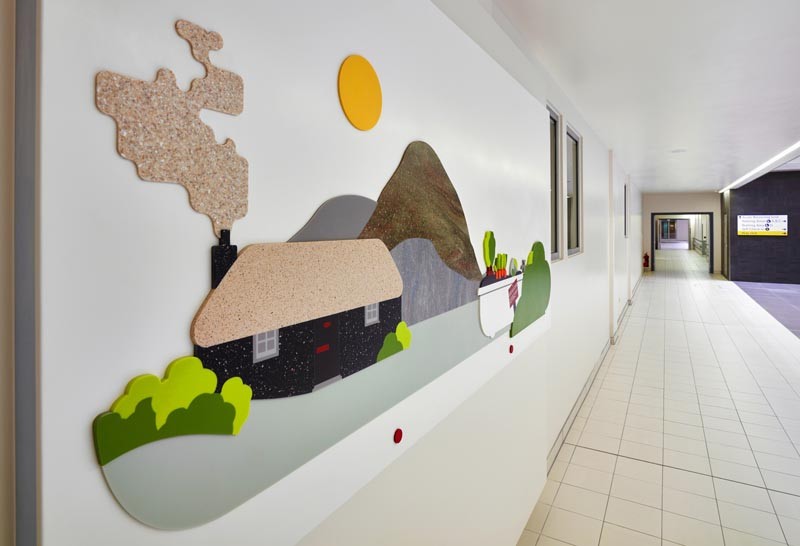 The new South Glasgow University Hospital and Royal Hospital for Sick Children features an art project in the form of 22 memorable ‘landmarks’ made from Corian®, designed to help people navigate the building. Photography by Andrew Lee for Graphical House, all rights reserved.

The new South Glasgow University Hospital and Royal Hospital for Sick Children is the largest capital healthcare project in the UK with an investment of £840 million. Over 14 floors and 160,000sqm, it houses 1109 adult and 256 children's beds. The new development by Brookfield Multiplex Europe completes this year, replacing four older hospitals in Glasgow.

As part of the NHS GGC Employers Requirements, six art projects were commissioned for the impressive new building, including a scheme to create 22 eye-catching images that would help people to visually navigate the hospital. Positioned in a busy multi-use area called the Podium and at the junctions where various ‘streets’ of the hospital intersect, these colourful 3D artworks are intended to have a high recognition value and to work in the way that familiar urban landmarks do, with all their memorable or personal meaning.

The team responsible for conceiving and creating the artwork included art consultants Ginkgo Projects, artist Rachel Mimiec, designers Graphical House and interior architects Haa design. “In a city there are signs, but sometimes you find your way around by recognising a particular church or statue,” says Chris Fremantle, project manager for Ginkgo Projects, “The challenge was to create these landmarks in a way that would not only be attractive, but also highly functional, while also being suitable for the sterile interiors of a hospital.”

The material chosen to realise this vision was Corian® advanced surface – both for its design versatility and its proven track record as a reliable and hygienic surface for healthcare environments. Corian® also offers an extensive colour palette of over 90 hues, which further enhance the potential for creative interpretation.

Inspiration for the project evolved through a series of workshops based around the idea of noteworthy journeys, held by artist Rachel Mimiec within the local community and at a number of hospitals. The recurrent theme to emerge was how distinctive objects played a key part in signposting memory. The task was then to refine these ideas into something, tangible, relevant and meaningful for the hospital.

Jean Camplisson from Haa Design said, “We felt that the landmarks needed to be unique and suggested that each one should represent a story from a staff member. As Rachel Mimiec embarked on interviews with staff, Graphical House developed a style for the designs and we at Haa Design looked into materials suitable for the construction of the landmarks.”

“NHSGGC, who commissioned the work, also wanted to find a way to incorporate aspects of the written narrative from the the staff members' stories within the visual imagery of the artworks. So the poet Robin Wilson was invited to write a small poem based on each person’s story and these have been incorporated within the detail of each landmark.”

“We decided to use Corian® because it met all the challenges with infection control, but also because it could be used in a 3D way. The landmarks all have a similar style and identity, a background of Corian® in white colour with the designs mounted in coloured Corian®. Most are large panels that wrap around a corner, so we also needed flexibility. Corian® is an ideal material as it is used in healthcare environments where hygiene is an issue.”

The stories that emerged, and which have been reinterpreted and immortalised in the Corian® panels, each have a distinctive quirky charm, whether they feature caravans, bicycles, spaceships, rowing boats, park benches, yoga poses or beach scenes. Once the stories, drawings and poems were in place, translating these into physical form using Corian® involved skilled fabrication.

Daniel Ibbotson, director of Graphical House, says: “The panels needed to be striking so you can spot them from the far end of a corridor and recognise them. But, they also had to be beautiful once you were up close. We wanted them to be actual objects rather than just pictures on the surface of the wall, we wanted them to have depth and presence. It was an exciting project because nothing quite like this has been done with Corian® before.”

Interior Surfaces Specialists, based in Sheffield, applied CNC technology to cut out the various ‘jigsaw’ pieces of Corian® and then painstakingly composed each panel with seamless bonding, thermoforming where necessary, and many hours of careful hand-finishing. The result is spectacular – a truly innovative, individual and unforgettable addition to the character and the wayfinding of the new hospital.

Building a Healthier Future for Children at Nemours/Alfred I. duPont Hospital