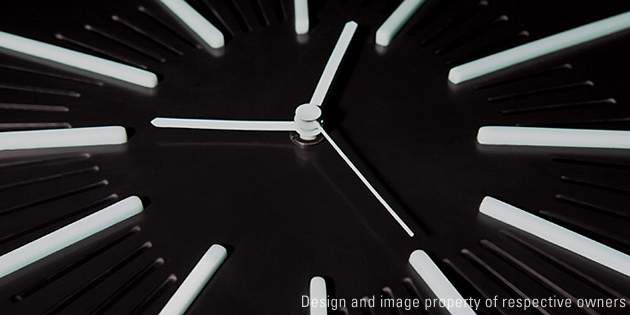 “We succeeded in mixing what seemed absolutely impossible,” says Jiří Helikar, a member of the ELTON Board. “I mean delicate and precise clock engineering, a high-tech material intended for other applications, and craft of leading Czech graphic designers.”

The concept authors are Michal Froněk and Jan Němeček from the Olgoj Chorchoj (Allghoi Khorkhoi) studio. They had been working with the ELTON clock company from Nové Město nad Metují for years. The partnership started with the idea of finding a new product for the wall clock segment.

“Wall clocks are a relatively specific matter. What makes them interesting is the dial plate – its size, material, graphic design and shape.” says Michal Froněk. And that is why Olgoj Chorchoj and ELTON decided to select Corian® solid surface, an unconventional material on the clock market.

Corian® was used as the common theme for all of the dial designs, with its fabrication and shaping capabilities, milling and machining options, and sweeping colour palette.

“We knew what we could expect from the designers: an avant-garde design from Petr Babák, a bit of classical work from professor Vaněk, and well-known sophisticated design from the Najbrt studio. Pavel Zelenka came with cooperation from professor Solpera and Robert Novák to create a very simple, clean design.” says Michal Froněk.

“We would like to continue our project in the future too. Now we have 5 graphic artists but intend to hire about fifteen studios to cover the whole of the Czech graphic design of the early 21st century,” adds Michal Froněk. He continues, “Corian® solid surface is an interesting material for a clock series made in cooperation with the ELTON clock making company. The collection may extend up to 30 clocks in two years. Indeed, we can take two more steps forward in the world design context. It is a sort of shape play as the only part we can work with in wall clocks is the dial plate.”

Zuzana Lednická (Najbrt studio) - The 78 DOTS clock by Zuzana Lednická is based on transcription of digits into dots, which increase in time. Two basic colours are used – black and white.

Zuzana Lednická was born on 16th March, 1974 at Hradec Králové. She studied toy design at the Secondary School of Decorative Arts in Prague and graphic design under the leadership of Zdeněk Ziegler at the Academy of Arts, Design and Architecture in Prague. She has been working with the Najbrt studio since 1995, focusing on corporate design for companies and hotels and such cultural projects as film and theatre posters, fine art publications and exhibition projects. Her work includes a book on Libuše Niklová, Czech100DesignIcons and visual appearance for the Josef hotel and Karlovy Vary Film Festival. She has also created the Mojemoje brand, including children’s collections, bags and snowboards. She is a member of the Typodesign Club.

Rostislav Vaněk - The Prague 80’s Prim clock is inspired by the clocks made and installed on Prague streets during the 1980’s. The clock converts the outdoor clock look into an interior design using colour duplication and plastic interpretation of the clock applications.

Rostislav Vaněk is one of the leading Czech graphic designers. His work includes all aspects of the graphic design scale – branding, posters, book graphic and stamps. He participated in the extensive indication graphic sets for the Prague subway, Czechoslovak airlines, Czechoslovak Trade Bank, New Stage of the National Theatre, prominent Prague hotels and many other projects. He is also the graphic designer of more than one thousand books from Czech publishers. His work has been awarded valuable prizes many times both at home and abroad. His pedagogical and organisational work contributes to a higher standard of the Czech graphic design. He takes part in arranging leading national competitions and is the Chairman and one of the founders of the prestigious Typodesign Club. He is the head of the Graphic Design and Visual Communication studio at the Academy of Art, Design and Architecture in Prague.

Václav Sloup - At the very first sight, Václav Sloup’s clock reveals a simple trick: how to transform one thing into another through a trivial operation. To make two in one in fact! The Prim Igen45 watch turns into a wall clock by simply being hung on a small hook inside a white circle made of Corian. As Michal Froněk from the Olgoj Chorchoj studio wrote: “It is a minimalistic, yet very effective approach.” Let me add that you can remove the watch any time and wear it for any occasion during the day and then put it back in the evening to get a wall clock again. We devoted the clock to our favourite and almost forgotten Czech actor, Václav Sloup.

A graphic designer and university teacher, who tends to ‘tease snakes with a bare foot’. Founder of the Laboratory studio, where he, together with a few external designers, examines the vast fields of graphic design. He is also active as the head of the Graphic Design and New Media studio at the Academy of Art, Design and Architecture in Prague. He has been awarded a lot of prestigious prizes for his Laboratory work; the most recent being the Graphic Designer of the Year at the Czech Grand Design and the main Grand Designer of the Year prize in all categories for his complex visual style design for the National Technical Library in Prague.

Pavel Zelenka - The TeeVee clock is a tribute to the op-art style of the TV clock made by professor Jan Solpera, displayed by the Czechoslovak Television in 1960s and 70s. The author transforms the originally flat design into a three-dimensional object applying all technological options provided by the material used.

Together with Václav Sinevič, Pavel Zelenka founded the Marvil graphic studio in 1995, which has gradually become a complex design service provider and one of the leading Czech graphic studios. Zelenka’s graphic projects were acknowledged in the Most Beautiful Book of the Year competition. In the studio, he was the leader of such projects as corporate identities for the ČEZ Group, Prague Stock Exchange and Forests of the CR. In 2003, together with his colleagues Filip Blažek and Jakub Krč, he founded the Typo magazine devoted to typography and visual communication. Since 2006, he has been giving lectures at the Academy of Art, Design and Architecture in Prague focusing on Branding and Brand Building.

Robert V. Novák - The R.V.N. clock represents a very simple minimalistic design. A milled dial plate and slim and distinct hands are the essence of the project. Robert V. Novák – a graphic designer, stenographer and photographer.

About ELTON hodinářská, a.s. – The manufacturer of the well-known PRIM watches and clocks based at Nové Město nad Metují, Czech Republic, with an over 60-year long tradition. Today’s ELTON production draws on and develops the rich historical tradition, enhancing it with completely new client approaches. The company now focuses on mechanical tailor-made watches meeting all clients’ requirements. As the future end user, the client gets enough space to define the final appearance of the watch to be made. ELTON hodinářská, a.s., the owner of the PRIM trademark, is one of few companies worldwide that are able to manufacture mechanical clocks and watches including the clockwork.