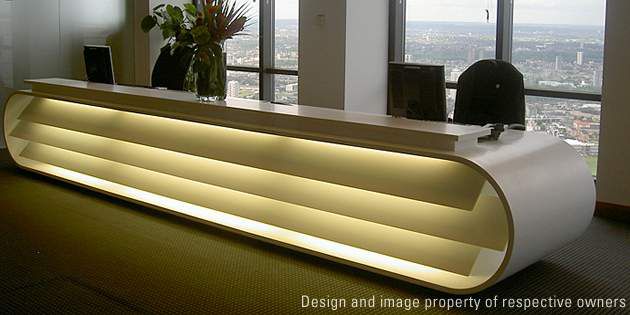 Confidence is paramount when putting in a wining performance and it was a key factor in London’s successful Olympic bid for the 2012 Olympic Games. The pitch had to show that this modern, forward-looking city could perform on every level. Knowing that first impressions count, the London 2012 headquarters were designed by Huw Owen of Owen+Kimble Architects to both inspire and reassure that the city aimed to be the very best. So when it came to choosing the right material for the furniture design, only the highest standards in performance, endurance and aesthetics would do.

Powerdesk UK, the specialists in “intelligent furniture” were contracted to make the reception desk and specified Corian® for this dramatic 5 metre long design. The original solid surface invented and made only by DuPont, Corian® was chosen because Powerdesk was already very familiar with what the material offered in terms of versatility, beauty and durability.

The furniture design - an elegant elliptical shape - makes full use of the material’s ability to be thermoformed into sensual curves and to be joined to create a seamless, monolithic effect. In cool, fresh Glacier White, the desk also exploits the practical properties that make Corian® solid surface such a delight to live and work with. Completely homogenous and nonporous, Corian® solid surface is stain-resistant and easy to clean and maintain. Should any minor scuffs or scratches occur, these too can be easily removed and the surface returned to its pristine beauty. Smooth and silky to the touch, Corian® is pleasingly tactile, while the material’s translucency allows for striking lighting effects.

DuPont and Powerdesk congratulate Lord Coe and the tireless enthusiasm and determination of the whole team in bringing the games to London.