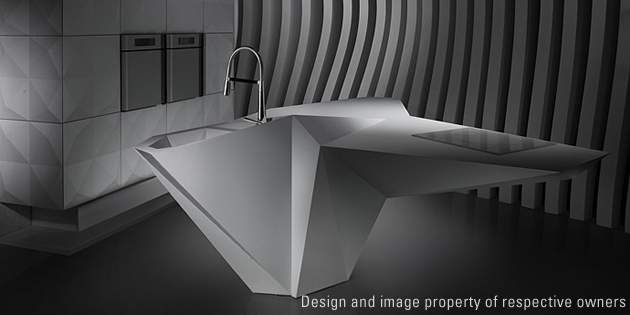 Like the shapes created by the Oriental art of folding paper, Karim Rashid’s new Origami Island kitchen, designed for Amr Helmy Designs, reveals a complex design that is simultaneously elegant and subtle. Made with Corian® solid surface, this kitchen was skillfully manufactured by the Egyptian producer Amr Helmy Designs, a company that specialises in innovative projects with Corian® solid surface.

Origami Island’s asymmetrical contours create a streamlined sculptured design. Its narrow base expands into a wide countertop divided into three functional areas: the cleaning area with integrated sink, the cooking area, and a snack area. A large wall cabinet with cupboard space, drawers, and kitchen appliances complements the island. The cabinet door panelling and drawers are also made with Corian® solid surface, and decorated with a three-dimensional retro-pop pattern.

Origami Island is an unconventional kitchen by the eclectic designer Karim Rashid, who expresses, through this design, his wish to “change the world” and invites us to enjoy the pleasure of kitchen conviviality through this original, but functional and welcoming creation.