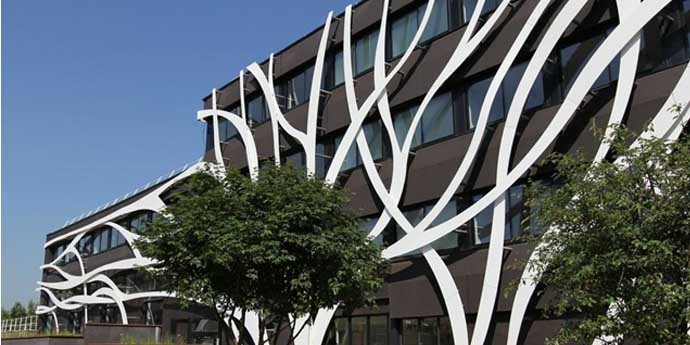 Val-de-Reuil (Eure) : Corian® is used for the rehabilitation of the « 4 soleils » building, a project of the architects Bernard Malecamp and Nicolas Mevel; photo Jean-Marc David for Nicolas Mevel Architecture, all rights reserved.

The « 4 soleils » building... an emblematic spot of Val-de-Reuil, the youngest town in France. For this heavy rehabilitation project, the cityhall of Val-de-Reuil wanted an original and innovative facade aspect, from an aesthetical and technical point of view alike. The using of Corian® high tech surface, commonly used in pharmaceutical laboratories, is not only a wink to the importance of this activity in Val-de-Reuil, but also a technologic achievement which had never been carried out with this material.

Indeed, for this « bridge building » (which crosses over the road), a continuity between the lower ground part and the bridge part had to be conceived in the spirit of the architectural and urban renewal of Val-de-Reuil. The city, by its history, has a center characterized by a distinctive form of urbanism, known as « urbanism on slab ». 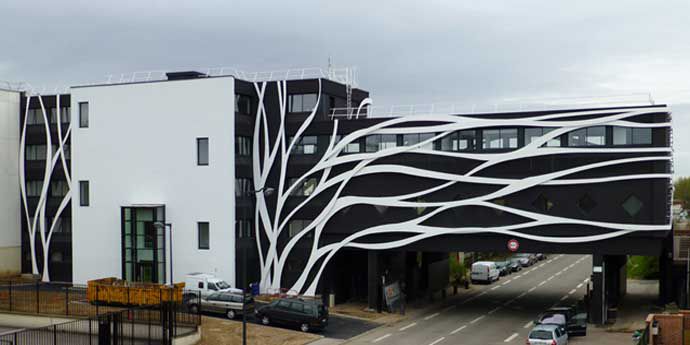 Val-de-Reuil (Eure) : Corian® is used for the rehabilitation of the « 4 soleils » building, a project of the architects Bernard Malecamp and Nicolas Mevel - photo Créa Diffusion, all rights reserved.

Entirely disused, there was no intention of destroying this building. Fabrice Barbe, Services General Director of the cityhall, precises : « This building is a geographical landmark of the town and in a district which was exclusively constituted of social housing until this day. We wanted a meaningful project both on the form and the substance. We chose to transform the building into a office centre to galvanise the district and the architects Bernard Malecamp and Nicolas Mevel proposed the principle of an arborescence in Corian®, to be in accordance with the town approach on the architectural front : innovative and renewed. »

For the implementation of Corian®, the challenge lied in the material fabrication as much as its fastening system. The certified fabricator Créa Diffusion, at the root of many innovative projects, succeeded in extending the limits.

From a technical point of view, the goal was to combine a 3D pipe-bending with an accurate CNC cutting. For this purpose, Créa Diffusion developed a prehension system on the cutting machine. The process developed for the setting up of this facade consists of four stages:

First, the implementation of the bindings was carried out from plans to the facade with a few centimetres margin of error. The second stage consisted in cutting again, thanks to a laser beam, the stainless steel tubes which are used as wedges to take distance from the facade. Then, from the facade toward the plans, using the laser to measure the waiting fixing heads to suppress the margin of error and adapt (slightly) the plans to produce the strips and the fastening points drilling in workshop. And finally the assembly on the facade, as only works to carry out on the spot, the filling up of the hidden bolts in order to make them invisible.

Créa Diffusion has developed a specific assembling system which enables a differenciated fastening on three differents planes (at 20, 30 and 40 cm) of the branches in Corian® which mix up and criss-cross.

Tests done with the help of the CSTB, performed in situ (wrenching of bindings) and at Créa Diffusion (traction and shearing on similar assembling) enabled to gain a certification from the SOCOTEC.

Some elements of the arborescences in Corian® have been used for the interior design (reception desks, wall panels).

250 pannels (19 mm thick) were requiered to undertake this contruction which, due to its originality and its technical innovations, was honored by François Hollande in last January...